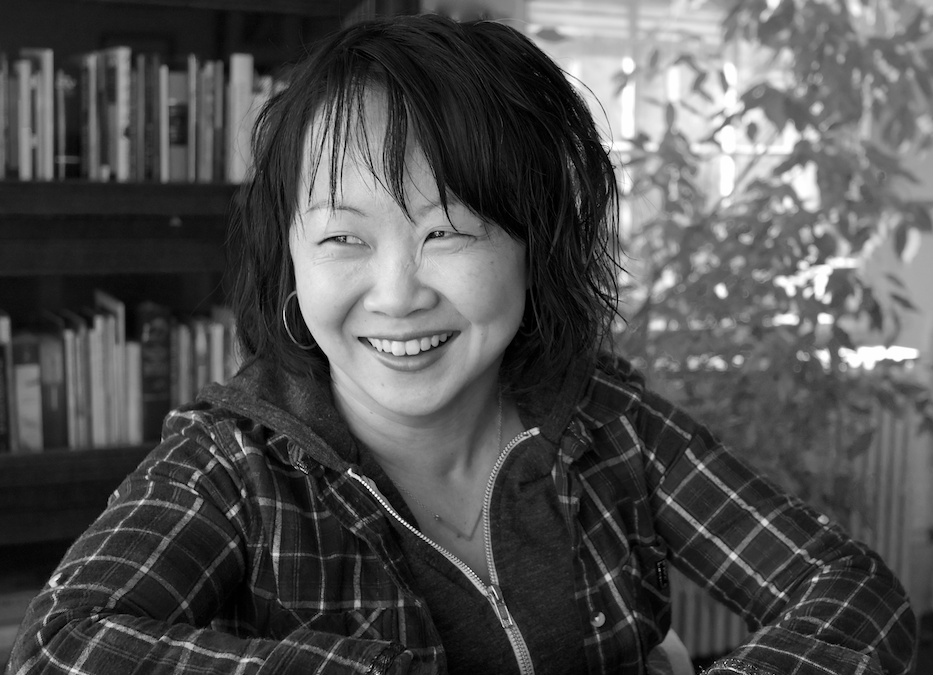 Annie Kim’s first poetry collection, Into the Cyclorama, won the 2015 Michael Waters Poetry Prize. Her poems have appeared in Kenyon Review, Ninth Letter, Mudlark, Asian American Literary Review, Crab Orchard Review, and elsewhere. A graduate of Warren Wilson College’s MFA Program for Writers, Kim is the recipient of fellowships from the Virginia Center for Creative Arts and the Hambidge Center, and serves as an editor for DMQ Review. Annie will teach The Poetry of Resistance for WriterHouse on Sunday, April 2nd.  She was featured in the January 31, 2017 newsletter.

every day now we think
the world is on fire

Think of all the things you could put in a year.

That antique button rolling off
your coat, leaving just one thread.

First car, that big white Oldsmobile
you plunged into a snowbank.

Each heartbreak swooping in for its
own black bit of universe—

you understand. But where will we file
the could-have-beens? Lost audio,

deleted scenes, thumb trailing raindrops
on your cellphone, train seat beside you

freshly vacant. And this craving,
picking up steam each year, to

hold it all before your eyes, grab
both ends of this thin gold string?

At the center of my life I find these holes.

Jonah is more popular than Jesus
on the walls of the chilly catacombs.
Leisurely reclining beneath his vine,
at sea in his little boat. He’s the Man
of Sorrows and our man, too—
no one wants to bear bad news.

For years I listened to 911 calls.
Sorting photos on the conference table—
a bullet tweezed from the lung, an arm
peeking out from the wet blue tarp.
All the mangled cars, starbursts in the glass
where heads hit. My job was to tell
the story and I was good at it.

There was the man trapped in his bedroom
while his house burned around him.
Then the man calling in his own death—
before it, that white wall, before
they found his head blown, his long legs
scissored in the grass behind the bulky generators.
His voice square, rehearsed.
Did you say a gun? she asks the empty air
before the click.

In the story of Jonah and the whale
I am the whale. Full of Jonah, kelp,
and all the nameless floating bits
just below the surface of the ocean.

And the bliss and the shame.
That day he stood watching the Americans,
they had been following the trains for weeks.
Small at six, muddy to the knees (it was
the rainy season), looking up through two,
perfectly tender, rumball eyes.
Trace the swing of their arms—young corporals
fresh from St. Louis, Sioux City, Detroit—
how the light in this curious country
flames the hair along them into honey-wheat.
Up and down: fifty-pound metallic drums
of milk, finely evaporated, tinned beef—
all twentieth-century forms of necessity.
And the boy—he will repeat this later
to his daughters in their kitchen—
asks for nothing, though he stares.
Yes you, come here!
The soldier points at him. Reaches in his pocket.
The boy approaches.
And like a dove from heaven it descends:
a bar of chocolate, bigger than his hand. Complete.
Peeling back the crisp tinfoil, black squares
that will melt into a river of forgetting, the boy
who is my father smiles.
The war has just begun.

(originally published in Connotation Press: An Online Artifact, May 2015)